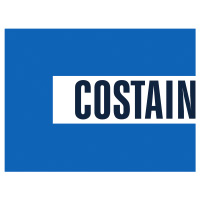 Recognised as one of the UK's leading engineering solutions companies, and featured in the nations's Top 100 'Most Admired' companies, Costain was founded in 1865 in Liverpool by Richard Costain and now has its headquarters in Maidehead. Costain had a turnover of £1.1 billion in 2014 and are listed on the London Stock Exchange. Costain Group operate in the following sectors; rail, highways, power, oil & gas, water and nuclear.

Costain have been involved in the following major projects: Thames Barrier, Kings Cross Western Ticketing Hall and Dubai International Airport. Costain is a rewarding place to work, creating and developing solutions and improving infrastructure. Costin are committed to both sustainability and operating in a responsible manner, their message 'Costain Cares' drives their business and is integral to everything they do as a firm. Costain employer over 3,300 people in various roles.

Costain Group are working with Skanska to construct the new Crossrail station at Paddington, this helped to divert 710 tonnes of material to landfill.

Did you know... since 1943 Costain has produced in excess of 50 million railway sleeps made from precast concrete.

Costain currently have no jobs available

Not to worry - we still have lots of opportunities available on RateMyPlacement.

Do you represent Costain?

Get in touch to find out how we can help you recruit the best students for your placement, internship, insight or vacation scheme opportunities.