BREAKING NEWS: Mariah Carey releases new Christmas single, All I want for Christmas is an internship. Be like Mariah, and check out our jobs page.

Nigella's recipes are from her Christmas cookbook, Christmas, and each recipe is as indulgent and sensual as an Elvis ballad.

Up against the mother of British cooking are six creative, easy to follow and devilishly tasty recipes from RateMyPlacement.

All can be made on the day, without the need for obscure herbs, eleven different types of salt and a scratch card jackpot win to afford the ingredients.

"My 'Spiced and Superjuicy Turkey' is hard to resist."

STEP 1: Put the water in your largest cooking pot (or bucket). Squeeze the juice from the orange into the water before adding the husks.

STEP 2: Add all of the other ingredients and stir to combine the syrup, sugar, salt and runny honey.

STEP 3: Remove any string from the turkey. Remove the giblets, and put them in the fridge if so that you can use them for your gravy stock.

STEP 4: Now lower the bird into the liquid you made earlier. Pour in more water if the turkey is not completely submerged.

STEP 5: Keep it covered in a cold place - be it the fridge, or even outside - overnight or up to 48 hours before you cook the turkey.

STEP 6: Take the turkey out of the liquid 1-2 hours before you put it in the oven, drying it with kitchen roll. Now you can preheat the oven oven to 200°C/gas mark 6.

STEP 7: Melt the goose fat and maple syrup on a low heat. Paint the turkey with this glaze before roasting and continue to baste it periodically as it cooks.

STEP 8: Roast for 2.5 hours. Pierce the turkey with pointy end of a sharp knife where the body meets the leg. If the juices run clear - it's cooked; if still pink, continue to roast until they run clear.

STEP 9: Take the turkey out of the oven, and let it sit in a foil tent for 30 mins before serving. 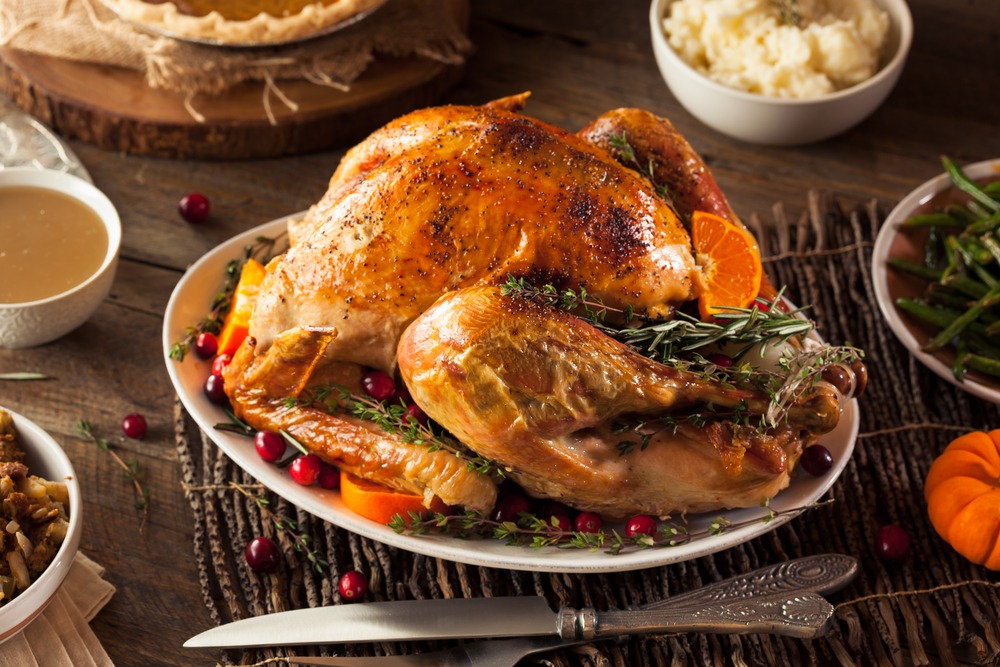 Imagine the situation... You're turkey shopping in Tesco. A fine specimen catches your eye. It's the size of Big Bird from Sesame Street. This turkey could feed an entire netball team. It's your dream bird.

But the price... £40 is extortionate! Your fridge isn't even big enough for such a creature. What do you do?

RateMyPlacement's Spinach & Ricotta Stuffed Turkey Breast is the perfect recipe if you're on a miniature budget and have a miniature fridge.

It will get a few oohs and ahhs when you take it out of the oven too.

STEP 4: Remove turkey breast from brine, pat it dry and spread it out flat. Spread spinach and ricotta mixture inside the turkey breast to an inch of the edge.

STEP 5: Roll up and secure with butchers twine. Place the turkey in a roasting tin, and baste the top with butter, salt and pepper. 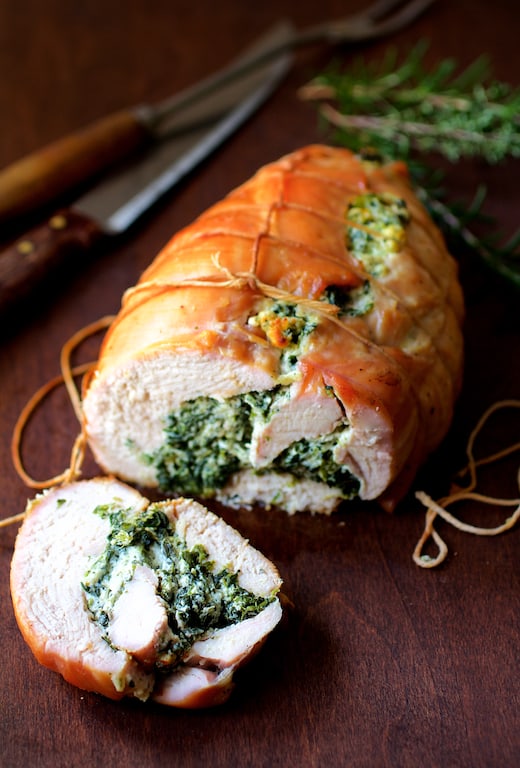 "Generally speaking, the best gravies are made by deglazing a joint's juices in the roasting tin, but given the stress of Christmas Day, making the gravy in a saucepan is a better route."

STEP 1: Put all the ingredients (except the honey and flour) into a saucepan and bring to a boil.

STEP 2: Cover with a lid, and let it simmer gently for 2 hours.

STEP 3: Strain the gravy stock through a sieve into a large measuring jug. This should give you approx. 1 litre of gravy.

STEP 4: Whisk the flour in a sauce with any juice from the turkey. Put the saucepan on a gentle heat, and whist in the rest of the stock and honey.

STEP 5: Let the gravy bubble away, stirring occasionally with a wooden spoon until it thickens. 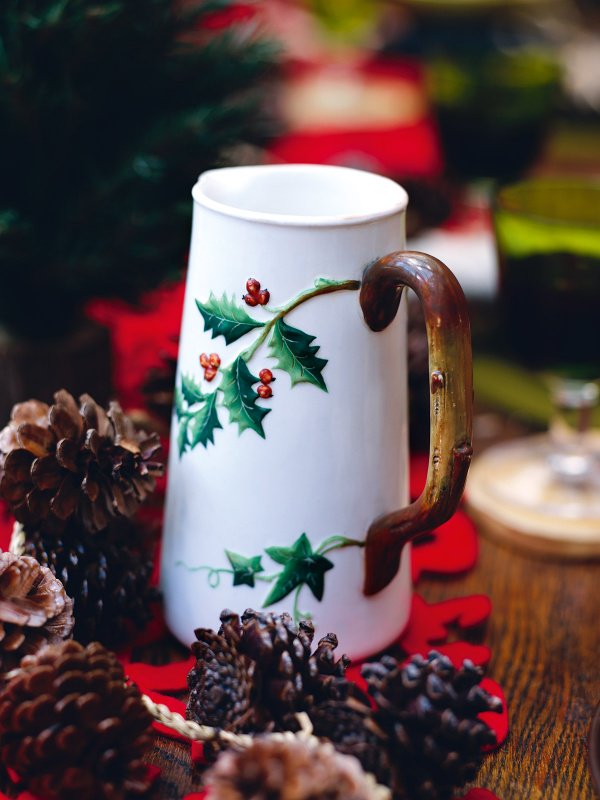 Nigella's Allspice Gravy has thirteen ingredients in it. Thirteen different ingredients! Most contestants used to turn up on Ready Steady Cook with only three or four.

Our gravy recipe is much, much simpler. Only three ingredients, but with more punch than Mike Tyson. This recipe for Brandy Gravy will have your friends and family dancing on the table by 3pm on Christmas Day.

STEP 1: After you have finished roasting your turkey, let it rest for 10 mins, then pour the juices into a jug.

STEP 2: Skim the fat off the top, leaving just a little in the juice for flavour.

STEP 3: Pour the juices into a saucepan and bring to the boil, then let it simmer so the juices reduce into a fine, fine stock.

STEP 4: Add some more of the fat to the saucepan, and begin to stir in the flour over a low heat. Keep stirring until the gravy is at your desired thickness.

STEP 5: Slowly stir in the brandy, and leave under the heat for a few minutes. You are now the Gravy King (or Lord Gravy). 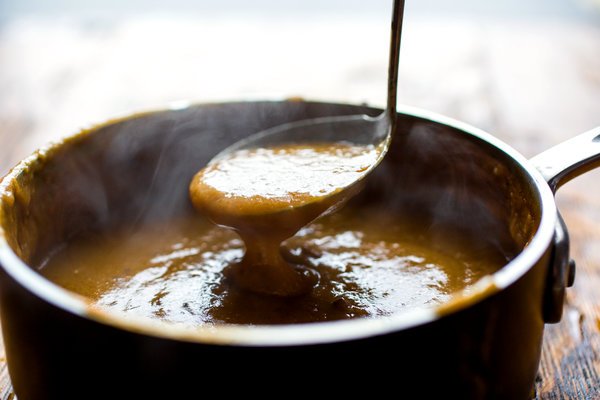 "I know that 'Perfect Roast Potatoes' is an immodest title but, I promise you, they are a seasonal spud sensation."

STEP 1: Preheat the oven to 250°C/gas mark 9. Put the goose fat into a large roasting and then into oven until it's frighteningly hot. 20 minutes should do.

STEP 2: Peel the potatoes, and cut them into 3. Put them in cold, salted water and bring to to a boil. Let them cook for 4 mins.

STEP 3: Drain the potatoes in a colander, and tip them back into the dry, empty saucepan. Sprinkle in the semolina.

STEP 4: Put a lid on the saucepan, and then shake the potatoes to coat them well. Give them a proper bashing, so that the edges fuzz and blur.

STEP 5: Tip the semolina-coated potatoes into the hot fat. Be careful, they splutter terrifically. Roast for an hour or until they are dark golden and crispy.

STEP 6: When food is served, bring your potatoes to the table with pride in your heart. 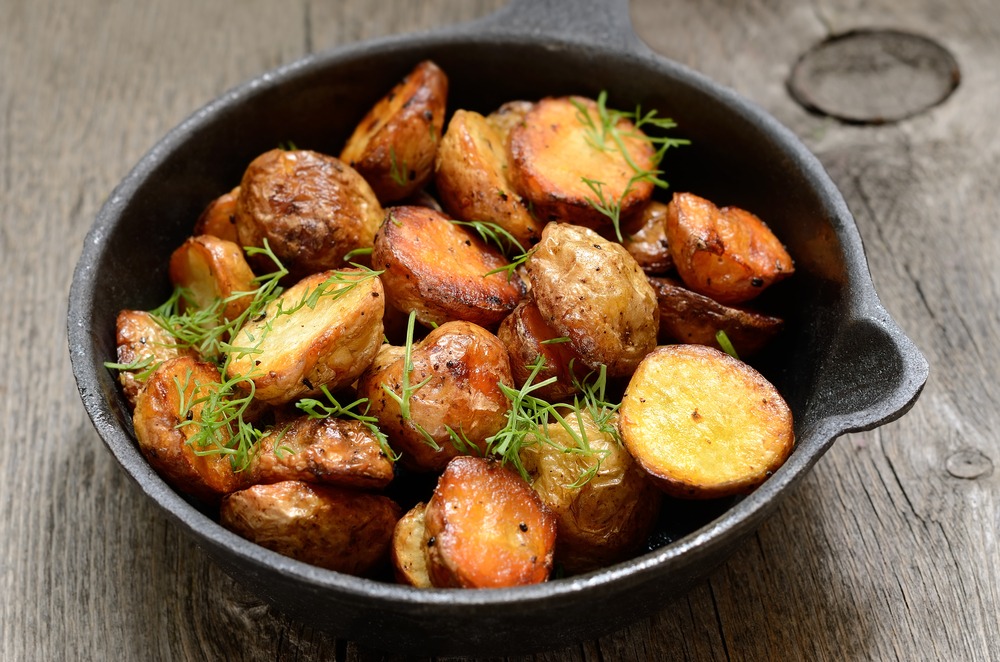 Chronicles will be written about the crispiness of these potatoes.

STEP 1: Preheat oven to 200°C/gas mark 6. Peel potatoes and cut into even quarters.

STEP 2: Add 2 litres of water to a large pot and bring to boil. Add 2 tbsp of salt, the baking soda, potatoes and stir. Reduce to a simmer, and cook (for about 10 mins) until a knife can easily pierce the potato.

STEP 3: Meanwhile, combine olive oil, garlic, rosemary and a tsp of black pepper in a small saucepan over low heat. When the garlic begins to brown, strain the infused into a large bowl and set aside.

STEP 5: Drain the potatoes, and transfer them into the bowl of infused oil. Toss roughly until potatoes are evenly coated and thin layer of mashed potato builds up on outside of each chunk.

STEP 6: Transfer potatoes to large rimmed baking tray, spreading them evenly. Roast for an hour, turning a few times, until potatoes are deep brown and crispy all over.

STEP 7: Transfer potatoes to a large bowl, season and pour remains of garlic and rosemary over. Finish with chopped parsley. 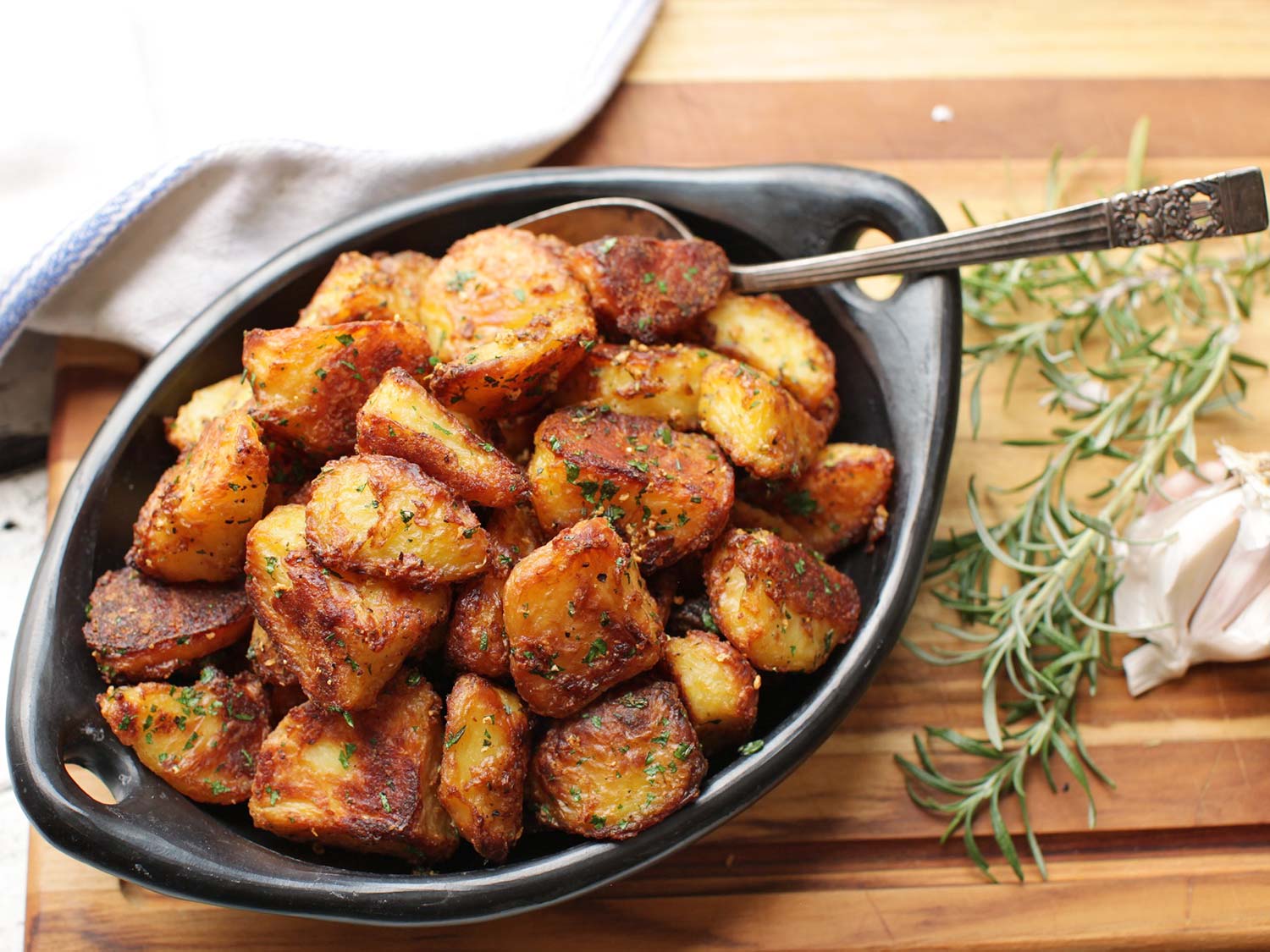 "I know that most people don't have trivial light-bulb moments when the notion pops into an already food-filled head to make a stuffing in which crumbled gingerbread cake replaces breadcrumbs, but that's how my mind works."

STEP 1: Finely chop the onions and apples, then fry in butter until soft.

STEP 2: Finely chop the streaky bacon and add to the onion and apple mixture. Fry for 5 mins, stirring frequently.

STEP 5: Add the beaten eggs and black pepper, and transfer all of the mixture into a generously buttered baking dish.

STEP 7: Let the cooked stuffing in its dish for 10 mins before slicing it. Or, you can just spoon from the dish if that's less stressful. 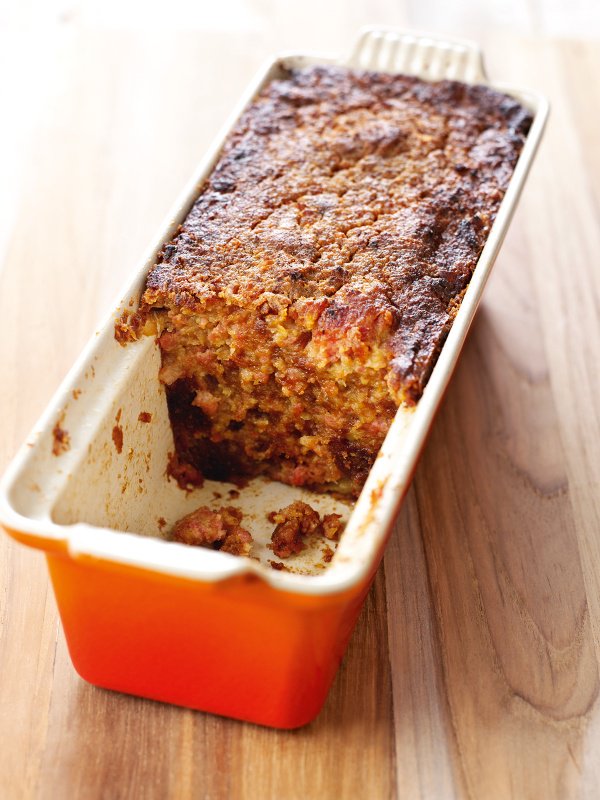 Gingerbread stuffing - Nigella has thrown a curveball. There has not been a ginger experiment of this daring since J.K. Rowling first wrote the name 'Ron Weasley'.

RateMyPlacement's response is rather more traditional, but in no way less magical.

In fact, Rowling herself was so inspired by this recipe, she is said to be thinking of writing a new adventure, Harry Potter and the Chamber of Sage 'n' Onion Stuffing Balls. Fact.

STEP 1: Melt the butter in a saucepan over a low heat, then add the coarsely-chopped onion. Fry for around 10 mins, until the onions are softer than a wee mouse's paw-prints in the snow.

STEP 2: Gradually stir in the rest of the ingredients, except for the vegetable oil, until well combined. Season to taste.

STEP 3: With damp hands, shape your stuffing mixture into 16-20 equally-sized.

STEP 4: Place on a lightly-greased tray, cover with cling film and chill in the fridge for 30 mins. While you wait, listen to Mariah Carey, and preheat the oven to 200°C/gas mark 6.

STEP 5: Add the vegetable oil to a large frying pan on a high heat. Fry the stuffing balls for 3-4 mins, turning once, so golden on both sides.

STEP 6: Return the stuffing balls to the baking try, and bake for 20-25 mins until cooked through. 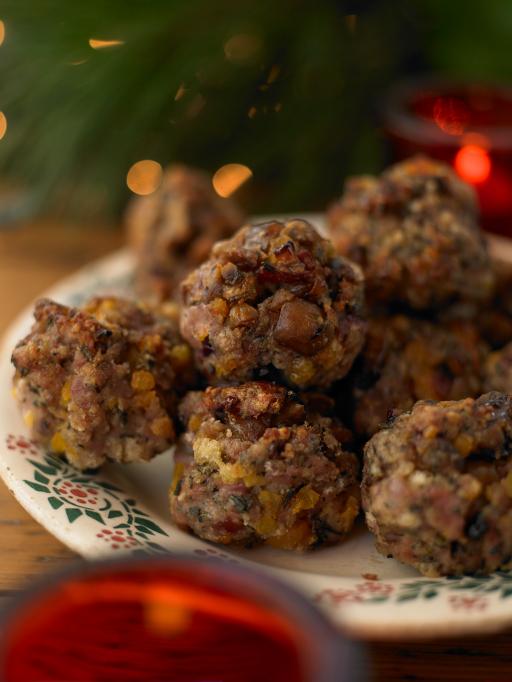 "There is an ambiguity about maple syrup, it's a sweetness less cloying."

STEP 2: Peel the parsnips and cut them lengthwise, then cut each strip in half.

STEP 3: Place parsnips into a roasting tin. Pour over the oil and dribble the maple syrup so all parsnips are covered evenly. Roast for around 35 mins until tender, sticky and brown. 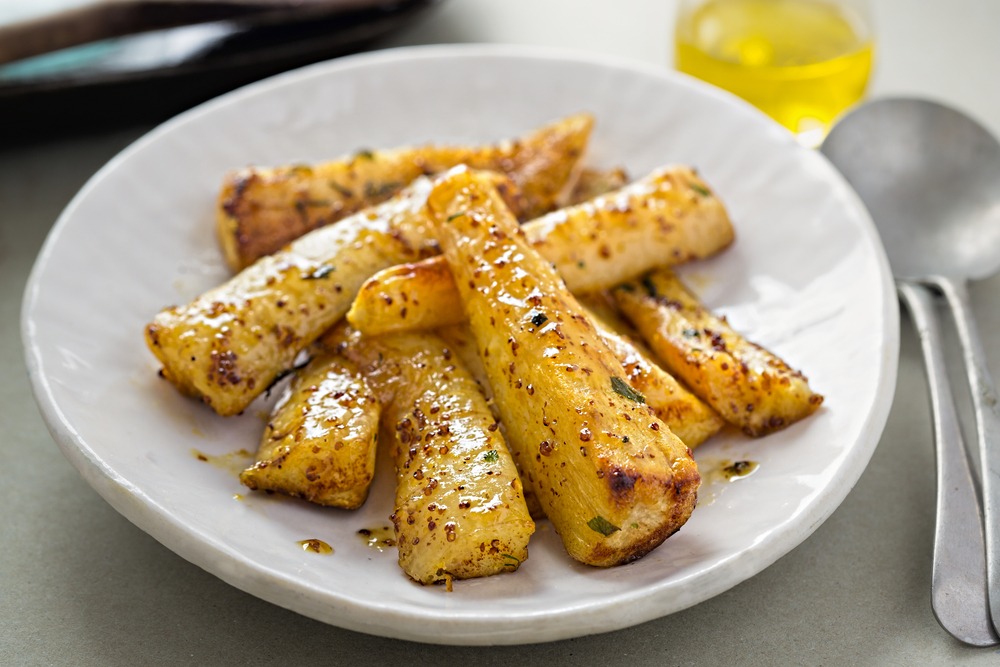 When you make Smoky Parsnip Crisps, it causes quite the stir.

All goes quiet as you approach. Eyes flicker. There are gasps as you place the parsnip crisps on the table. Soon, all are clapping and cheering.

It's like the opening scene of the Lion King, but with parsnip crisps being held aloft instead of the future king of Pride Rock.

STEP 2: Peel the parsnips (using a swivel blade peeler if you have one) into long strips. Discard the peel.

STEP 3: Place the strips into a mixing bowl and drizzle the vegetable oil. Add the paprika and salt, then toss well so parsnip strips are evenly coated. 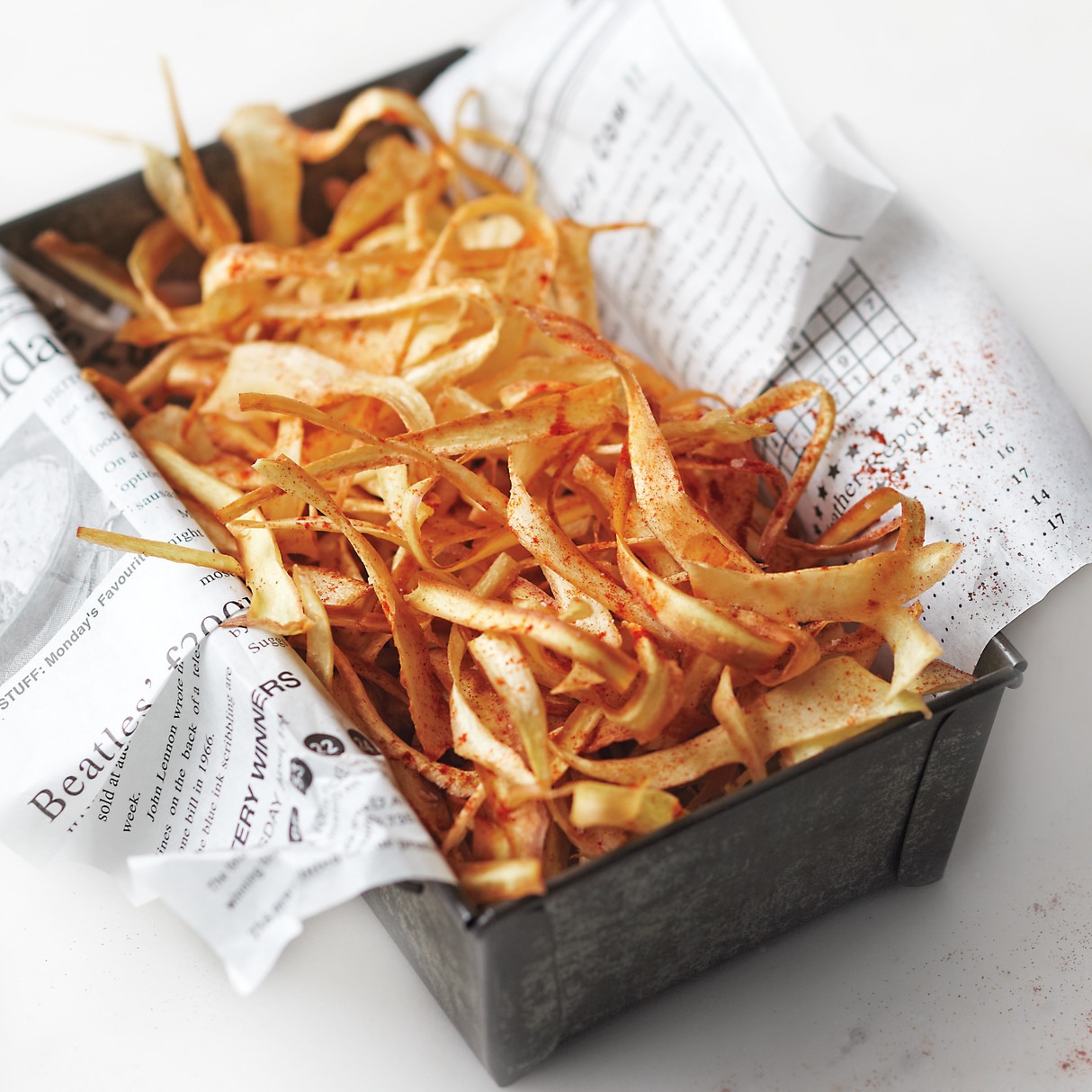 "My mother always served her brussels sprouts with a lot of buttered chestnuts. I have upped the ante by adding gorgeous salty pancetta cubes."

STEP 1: Trim the bottom off of each sprout, and cut a cross into each as you go.

STEP 2: Tip the sprouts into a large pan of salted boiling water. Cook for around 5 mins, until the sprouts are tender, then drain them.

STEP 3: Cook the pancetta in the oil until they're bronzed and crisp.

STEP 4: Add the chestnuts and butter to the cooked pancetta, then press the chestnuts with a wooden spoon to break them up a little.

STEP 5: Turn on the heat and add the marsala, letting it bubble away until the pancetta, butter and chestnuts form a syrup.

STEP 6: Add the drained sprouts and half of the parsley. Taste to check if further seasoning is required. Decant to a warm plate, and sprinkle the remaining parsley. 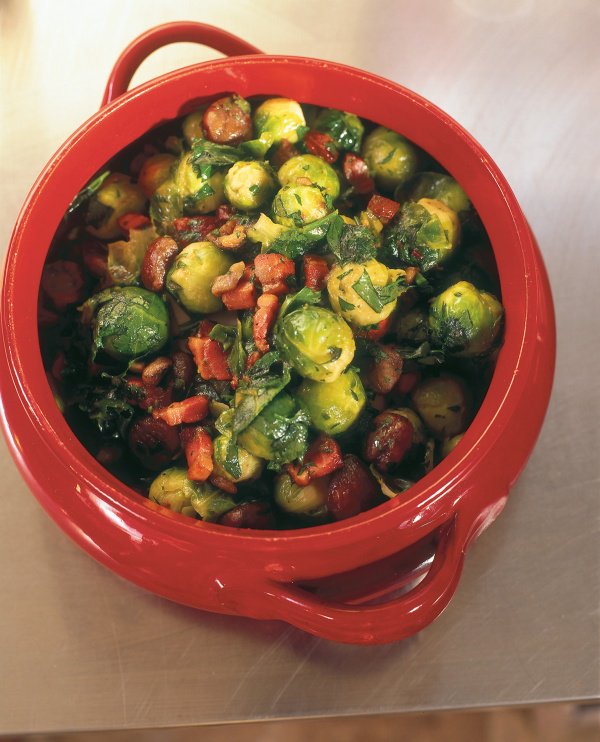 STEP 1: Melt butter and vegetable in a medium saucepan over low heat.

STEP 2: Crush garlic with flat side of knife and add to butter. Cook until lightly browned, then remove the garlic and leave it outside for the foxes.

STEP 3: Cut brussels sprouts in half, and add to pan flat side down. Cover with lid and leave them to cook (without stirring) for 10-15 mins, until the sprouts are tender

STEP 4: Add to a nice bowl, and sprinkle parmesan, salt and pepper. The crowd will go absolutely bananas. 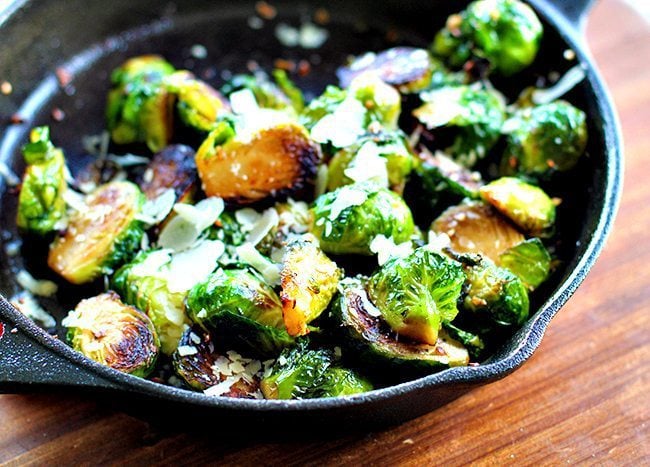 However, if you set fire to the kitchen or accidentally poison an uncle, it's best not to photograph the moment.

Merry Christmas, from RateMyPlacement and Nigella.

Looking for professional work experience in the new year?
Sign up with RateMyPlacement!

Conor has been writing about placements, internships and undergraduate work experience for RateMyPlacement.co.uk since July 2016, where he joined straight after graduating from university.