The 9 Avengers You’ll Live with at University

Finding people to live with whilst you’re at university can be hit or miss: there are some absolute heroes out there as well as a few villains. As one of the biggest movies of all time approaches - Avengers: Infinity War - we’ve put together a list of the 9 Marvel Avengers characters you’ll live with at University. 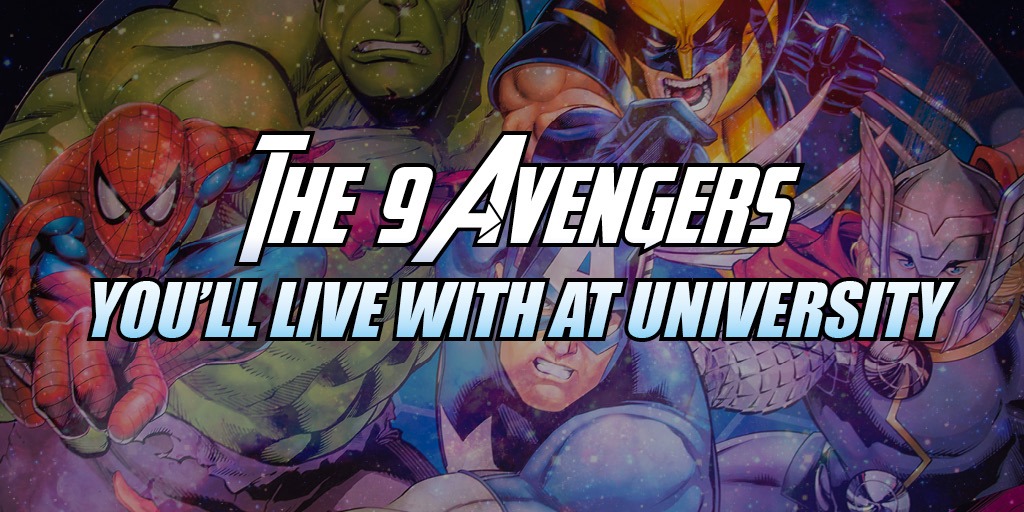 There’s always that one person who lives for the 'sesh'. They attend every night out and are always on the hunt for the next party, much like Tony Stark in his formative years.

The only difference is that Tony is a self described 'Genius, billionaire, playboy, philanthropist' so while it’s no mystery how Iron Man can afford this lifestyle, nobody’s quite sure how their student loan supports such expenditure.

Maybe they have rich parents. Maybe they too are wealthy arms dealers on the down low…

The gym lad is a curious creature. They wear shorts in every kind of weather and spend all day making 'gains' - do they even go to university?

That being said, if you end up in an altercation on a night out, you definitely want this guy backing you up.

Just remember, whatever you do, do not touch their precious protein powder… You don’t want to see them when they’re angry!

In a hurry because Ant-Man has just come on the TV? Jump straight to our latest vacancies page!

Captain America and Bucky Barnes are two of the best mates the cinematic world has ever seen. Steve Rogers will do anything for his friend and the same can be said about these two housemates.

They cook together, they study together, they probably nap together and always have each other’s backs. If you see one of them on their own, rest assured that the other probably isn’t far away! They go waaay back.

Pranks are funny - as long as you’re not on the receiving end.

This housemate is mischievous and sometimes outright evil, much like the infamous Asgardian Loki. Nobody is quite sure how to control this housemate - not even their family members can handle them!

One way to protect yourself though is to get The Hulk *cough* Gym Lad *cough* on your side, as they don’t play well together.

These two have definitely got something going on between them. Every now and then you might catch them staring longingly into each other’s eyes but nobody wants to call them out on it in case it makes things awkward.

Is anything actually going to happen between them? I guess we’ll find out sooner or later.

This housemate is a big deal at home, or so they keep telling you. They have some weird habits, apparently heating underwear in the oven is common in western Europe.

They have some great stories of adventures from back home though, top content to share with everyone at pre-drinks or over dinner.

9) HAWKEYE - The one that secretly holds everything together

Despite all of these rogue characters that you may end up living with at university, your mind can be at rest with the knowledge that there’s always that one housemate who somehow manages to hold everyone and everything together in the background.

They're always there to provide a motivational speech or two before a big house night out, they go under the radar, this person really is the MVP!

Nominate YOUR university society to win £1000!
How to secure part-time work at university
How To Revise Effectively For Your University Exams